As atmospheric CO2 levels rise, so too do those in the sea, leading to ocean acidification that outpaces that of any other time in tens of millions of years. Some effects of ocean acidification are imminent, like the fact that calcified organisms such as corals and shellfish will have access to less and less of the chemical components they need to build their shells and skeletons. Other outcomes are less clear, and scientists wanting to predict what may come of our quickly acidifying waters are looking to past climatic events that were similar to our own.

One such event, the Paleo-Eocene Thermal Maximum (PETM), which occurred 56 million years ago, is likely our closest analog to modern ocean acidification. Researchers who refer to the PETM as a case study have long suspected that ancient waters acidified then, but until recently, they never had physical evidence of it actually happening. Then just this past year, researchers uncovered the PETM’s chemical chronology encrypted in the shells of fossilized plankton, called foraminifera, and learned that the two timelines aren’t entirely similar; today’s surface ocean is acidifying ten times faster than it did during the PETM. Their findings were published in Paleoceanography in June, 2014. 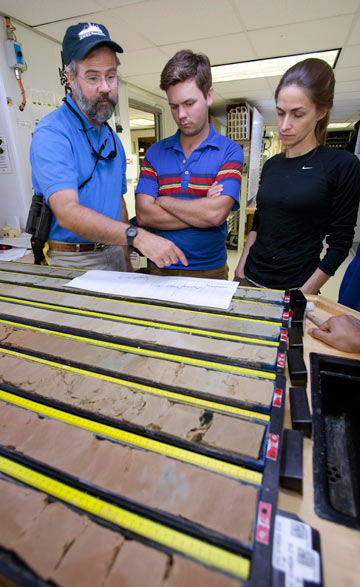 Penman (the lead author) offered this image of himself (center), Richard Norris (Scripps) and Pincelli Hull (Yale) inspecting sediment cores from the PETM while aboard a scientific drilling vessel. Photo credit Donald Penman.

“While foraminifera are alive, they incorporate the chemistry of the water into their shells,” said Bärbel Hönisch, associate professor of earth and environmental sciences at Columbia University and coauthor of the study. “When they die, they take that information with them into the sediment.”

Hönisch and several other scientists analyzed the chemical composition of fossilized foraminifera embedded in “nannofossil ooze,” a section of rock particularly rich with tiny fossilized organisms, which they drilled out of sub-ocean sediment near Japan.

Foraminifera, like coral and shellfish, pull carbonate ions from the surrounding seawater to build their shells. In a way, the chemical composition of these shells acts as a snapshot of the chemical composition of the water the foraminifer lived in. When water grows increasingly acidic, foraminifera replace whole carbonate molecules with borate molecules. When the scientists of this study inspected the boron composition of shells from plankton that died during the PETM, they learned not only how acidic the ocean was at the time, but also how quickly its chemistry shifted and how long it stayed that way.

“Acidification during the PETM was relatively rapid,” said oceanographer Richard Zeebe of the University of Hawaii at Manoa, another coauthor of the study, “but it was also sustained. The whole event took a very long time.” A massive surge in atmospheric carbon, its cause still unknown, warmed the globe by four to eight degrees and dropped the ocean’s pH by about 100 percent. Conditions remained that way for approximately 70,000 years. These environmental changes triggered many biological ones. Seafloor-dwelling foraminifera suffered mass extinction while another type of tiny aquatic organism, dinoflagellates, thrived and expanded.

Foraminifera like the one pictured above record their environment’s chemistry in calcium carbonate shells, essentially leaving a trail of chemical breadcrumbs for future investigators. Photo by Howard Spero.

Although the PETM ocean did acidify quickly, it happened ten times slower than what’s happening today. Our ocean’s pH has dropped from 8.2 to 8.1 in the last 150 years, an amount that took a few thousand years in the PETM. Scientists predict the drop will only continue, with the seas reaching a pH of 7.8 to 7.9 by 2100. That change was and continues to be fueled by manmade carbon being pumped into the atmosphere and subsequently absorbed by the ocean.

In understanding how to compare the two events and what outcomes will emerge from modern acidification, rate is key.

“In any aspect of environmental change, particularly global change, rate matters” said lead author Donald Penman of the University of California Santa Cruz. Natural buffers like deep seawater mixing likely mitigated acidification during the PETM. But those same buffers will surely be outpaced by today’s heightened rate. “If you put carbon dioxide into the ocean faster than its natural processes can deal with it,” Penman said, “then they don’t do you any good.”

Marine animals will also be challenged by the speed at which their environment is changing. “We know that organisms and ecosystems can adapt and evolve to slow changes as they have throughout earth’s history,” Penman said. “However, when you invoke the same change over a shorter time, then you can outstrip organisms’ ability to evolve with that change. Species go extinct, and marine ecosystems change dramatically, perhaps irrecoverably.”

The researchers noticed that extinctions occurred during the PETM even at a pH change rate of 0.1 per thousands of years – which may not bode well for today’s foraminifera.

With a clearer picture of the PETM painted, researchers can begin to draw more detailed analogies between the two events, and hopefully catch any drastic environmental changes before they surprise us.

“Now that we have [ocean acidification during PETM] quantified,” Penman said, “we can begin to make calculations of how much and how quickly carbon was emitted during the PETM. This will help us disentangle what sources of carbon and feedbacks were in operation during the PETM, and whether or not they are something we need to worry about in the future.”